Our research project on “Digitally Derived Evidence” examines the different legal standards of evidence applicable at various international accountability fora. This is crucial in order to ensure that the potential presented by digitally derived evidence for accountability efforts is met, while at the same time ensuring that the dangers presented by this evidence are avoided. The research is hence informed by criminal law, human rights law and international humanitarian law fact finding, and aims at informing these legal frameworks with a comparative overview and analysis of how different the evidentiary standards applicable at different accountability fora can accommodate the growing body of digitally derived evidence of atrocities.

The research project makes use of the expertise and infrastructure of both the Kalshoven-Gieskes Forum on International Humanitarian Law as well as the Grotius Centre for International Legal Studies at Leiden University. This research project is funded by the Federal Department of Foreign Affairs (FDFA), Switzerland.

The digital revolution has produced technologies, such as satellite imagery, social media, and big data analytics, that provide new information about atrocities committed in conflict zones. These digital tools can assist international accountability mechanisms – encompassing international and national criminal courts as well as fact finding bodies (like e.g. the International Humanitarian Fact Finding Commission under Article 90 of Additional Protocol I to the Geneva Conventions or UN Commissions of Inquiry) – in pursuing legal accountability for atrocities committed in conflicts. The fact that modern conflict is increasingly conducted using, and is influenced by, digital and cyber technologies provides a unique opportunity to harness these technologies for accountability purposes.

Recent developments provide a number of examples: in relation to Myanmar, the UN Office of the High Commissioner for Human Rights (OHCHR) used satellite imagery to document the systematic burning of Rohingya villages; in relation to Libya, the International Criminal Court (ICC) charged a defendant with war crimes based on social media videos; and in a trial before the Special Tribunal for Lebanon (STL), big data was used to establish connections between alleged perpetrators.

The increasing presence of digital technologies in conflict areas leaves behind a trail of digital breadcrumbs that can be used to pursue accountability for international crimes. This trail may be deliberately left behind – such as when an individual records a potential crime on their phone and uploads it to social media – or left behind inadvertently – such as when the GPS data on the mobile phones demonstrates large scale population displacement. However created, the trail of digital traces can provide much needed evidence for international accountability mechanisms investigating and prosecuting international crimes.

While technical expertise in the use of digital technologies is growing, both within international accountability mechanisms and among civil society actors seeking to support these mechanisms, research on the associated legal questions is lacking. In particular, questions concerning how the differing evidence regimes of various international accountability fora can accommodate digitally derived evidence remain open.

Understanding how digitally derived evidence can be accommodated across the legal regimes of different international accountability fora is complicated by two legal challenges. The first is that different international criminal justice mechanisms employ different evidentiary requirements and standards of proof depending on whether they are fact-finding bodies, semi-judicial institutions, or (international) criminal courts. Even within these categories there can be divergences: for example, a UN human rights fact-finding mission may employ different standards than the International Humanitarian Fact-Finding Commission (IHFFC) under Article 90 API. This challenge is compounded by a second, namely the lack of international legal rules for the collection, preservation, and sharing of digital evidence. The modern character of digitally derived evidence means that little guidance is available, both for international accountability mechanisms and for civil society actors, regarding how to approach it.

Despite a steadily growing amount of practice of international accountability mechanisms using digitally derived evidence, there is still little indication of how such evidence fits within different evidentiary standards. The OHCHR Fact Finding Mission on Myanmar made extensive use of digitally derived evidence in its September 2018 report concerning violence against Rohingya Muslims and other ethnic groups. The Mission’s Report uses satellite images to show the destruction of villages and uses Facebook posts by the Myanmar military to make findings concerning the military’s activities. Furthermore, Facebook posts are cited to support the finding that the military leadership in Myanmar possessed genocidal intent with respect to the killing and forced displacement of the Rohingya population. The Mission makes clear at the outset of the report that the standard of proof to which it is working is that of ‘reasonable grounds’ but does not detail the specific requirements for digitally derived evidence to meet this standard. The same is true in relation to the arrest warrant issued by the ICC for the suspect Al-Werfalli. The standard of proof for an ICC arrest warrant is reasonable grounds to believe, but the text of the warrant does not indicate how the social media videos on which the warrant is largely based were deemed to comply with this standard. Furthermore, the question remains open whether, in light of the standard of proof for both the Fact-Finding Mission and ICC arrest warrant being worded similarly, the standards of proof for the respective mechanisms is equivalent or broadly different.

The approach to the proposed research aims at capitalising on the broad intellectual resources available at Leiden Law School. A combination of staff and students are working together in a collaborative effort to conduct high quality research exploring how digitally derived evidence needs to be handled and treated in order to meet the different evidentiary standards of the different accountability fora. The research project hereby offers a number of selected students of the LL.M. programme in Public International Law offered at Leiden Law School the possibility to contribute to the project in the framework of the KGF’s IHL Clinic.

Individual researchers are leading, coordinating and supervising this collaborative effort, conducting substantive research and trainings that informs and guides the direction of the student-led component of the research. Students are tasked to further elaborate on, and workshop the developed ideas, putting them into practice – subject to a feedback loop from their peers and supervisors.

This approach to the research builds on previous experiences, among Leiden staff members, supervising projects of the Leiden IHL Clinic related to innovation and technology, such as the 2017 ‘IHL Twitter monitor’ project in cooperation with Humanity X (Leiden University, Centre for Innovation), the 2018 project ‘Towards a Responsible Approach to Data’, and the ongoing ‘IHL in Action: Respect for the Law on the Battlefield’ project in cooperation with the International Committee of the Red Cross (ICRC). 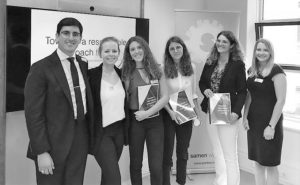 Testimonies of our IHL Clinic students

“I can fairly say that the Clinic was the highlight of the entire LL.M. programme. Very grateful to have been chosen to work in a small group of brilliant fellow students and supervisors.” – IHL Clinic student, working on the DDE project in the spring term 2019

“The DDE project was very interesting and a rewarding experience overall. I would really encourage future LL.M. students at Leiden University to apply for this project!” – IHL Clinic student, working on the DDE project in the spring term 2019

There will be three principal outputs to this research:

This research project is funded by the Federal Department of Foreign Affairs (FDFA), Switzerland.

Click here to get to our webpage with all publicly available research output! (first published in July 2021)