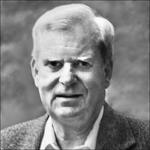 We are sad to have learned that George Hoover Aldrich, Professor Emeritus of International Humanitarian Law at Leiden Law School, passed away on 10 April 2019.

Professor Aldrich succeeded Professor Frits Kalshoven in his capacity as holder of the Red Cross Chair on International Humanitarian Law from 1990 until 1997. Due to his longstanding practical experience in and commitment to International Humanitarian Law, and because of his kind and thoughtful personality, Professor Aldrich’s appointment at Leiden Law School was an invaluable asset for both students and academic colleagues.

Apart from his academic career, Professor Aldrich served as International Judge and as Foreign Service Diplomat for the United States for 53 years, enhancing the development of International Humanitarian Law in theory and practice alike. Most notably, Professor Aldrich represented the United States as Ambassador and Head of Delegation during the Geneva Conference that resulted in the 1977 Additional Protocols to the Geneva Conventions relating to the protection of victims of international and non-international armed conflict.

He was furthermore a lawyer for the United States government, working principally in the field of International law from 1959 until 1981. He served as Deputy Legal Adviser of the U.S. State Department from 1969 to 1977, Legal Adviser to Dr. Henry Kissinger during the Vietnam Peace Negotiations, Ambassador and Deputy Special Representative of the President for the United Nations Law of the Sea Conference from 1977 to 1981, Member of the United Nations International Law Commission in 1981, Judge on the Iran-US Claims Tribunal in the Netherlands from 1981 to 2012, as well as Member of the Eritrea-Ethiopia Claims Commission.

These special experiences as a Judge and Legal Advisor in the area of international (humanitarian) law have also majorly influenced his career as an academic. He was once heard to remark that he would only write an article if he had something interesting to say. He truly understood academia and practice to be interrelated with each other, and therefore focussed on practically relevant problems. In this regard, it was no wonder that he was one of the first who published on the jurisdiction of the newly established International Criminal Tribunal for the Former Yugoslavia (ICTY). And it was probably also no coincidence that his inaugural address at Leiden dealt with a problem which is as relevant now as it was back then: “The Problem of Compliance in International Humanitarian Law”.

Professor Aldrich was born on February 25, 1932 in St. Louis, Missouri, and he is survived by his wife of 60 years, Rosemary, his three sons and five grandchildren. Our thoughts and our greatest sympathy are with Professor Aldrich’s family. He will be truly missed and remembered.