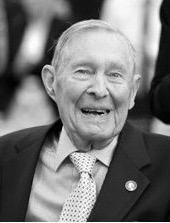 In his early career Frits Kalshoven was mainly a man of practice. In 1945 he joined the navy as an officer. After graduating he worked for many years as  a lecturer in criminal law and international law at the Royal Naval Academy in Den Helder.

But academia was calling. In the 1960s he worked on his doctoral thesis entitled ‘Belligerent reprisals’, for which he would achieve international recognition. Even now, this dissertation is still viewed as obligatory reading. He considered the time when he was preparing his dissertation as the most fascinating period in his professional career. It brought him to the Red Cross in Geneva, where he met the true greats in his field of expertise. As a result of his academic reputation and experience, Frits Kalshoven was also well equipped to contribute significantly to the further advancement of IHL. One of his achievements was his close involvement in the negotiations on the 1977 Additional Protocols to the Geneva Conventions which are among the most important treaties in this area. Throughout his work he remained first and foremost a legal expert, who was averse to politics which of course also played and continues to play a large role in the conflicts in which IHL must find its application.

Frits Kalshoven received the recognition he deserved for his contributions to IHL. At our law school, staff members Astrid Delissen and Gerard Tanja edited a Liber Amicorum (Humanitarian law of armed conflict: challenges ahead, 1991). In 2003 he received the Henri Dunant Medal and in 2015 the San Remo Prize for the Promotion, Dissemination and Teaching of International Humanitarian Law.

Frits – as he preferred to be called – inspired generations of students with his teaching on international humanitarian law and was highly approachable for his students. After his retirement he remained involved with his beloved Leiden Law School, up to the last months of his life. He stayed active in particular in the context of our Kalshoven-Gieskes Forum on International Humanitarian Law, which is named in part after him. He was a faithful participant in the activities of this Forum, and also tried to always attend the Moot Court named after him (the ‘Frits Kalshoven Competition on International Humanitarian Law’), even when his health slowly began to fail in recent years. Apart from losing one of the outstanding academics in his field, we will miss him as a dear colleague, friend and human being, who until the end remained kind, humble and giving, and was seen by many as one of the role models of a true humanitarian.